My First Day of School

Henry had become a creature of comfort in my new island home.  Though not nearly as attentive or affectionate as a pet dog, his alertness and allegiance to the morning sun proved his worthiness to the entire village.  Since our schools were located in the central village, most students walked to school. The little ones were trucked in from the northern and southern villages on the island council truck.

After a morning bucket bath and some Milo, my morning drink of choice, I walked outside of my house to give Henry some leftover tortilla scraps.  "Mike!  Are you ready for the day?"  Ari'i shouted from his bwia. Startled and filled with nervous excitement, I replied "Yes, I'm ready!"

Smiling back at me, he took one last sip of his morning tea before making his way towards the council truck.  "I am off to get the children now, so I will see you when I return."  I was used to a big yellow school bus in America, with seats and doors.  However, in Tamana, the school bus was an open aired truck bed.

Older students began arriving from the northern and southern villages soon after he left, and I could feel their curiosity as they walked by.  Trying not to make eye contact but yet at the same time, wanting to acknowledge my presence, many waved as they silently passed my house, which stood on the edge of the school compound.

No more than ten minutes after the truck departed, it returned with a full bed of primary students who shouted and waved "GOOD MORNING MISS," as they passed.  I reciprocated the acknowledgement by waving and shouting back "GOOD MORNING CHILDREN!"  Ari'i dropped off the children from and turned around to pick up the children from the other village. When he returned, three strikes on an old air tank signaled the start of morning assembly. 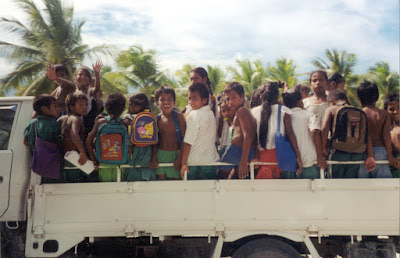 Head boys and head girls led the organized chaos which ended up in perfect rows of students.  When all were seated, teachers went to the front of the lines and began morning assembly.  Julie, the head teacher started by saying, "Welcome back to school children!  This is the start of the second trimester and we expect that you all know the rules of morning assembly."  Calling attention to the class six rows, she implored younger class rows to follow the older students' example with hands in their laps, mouths closed, ears opened, and eyes on the speaker.  However, as so many times before, I could tell that my hairy legs attracted more eyes than I was used to in the States.

Unlike the I-Kiribati, my Mexican genes gave me a seemingly overabundant amount of leg hair which amazed everyone from the youngest of students to the eldest of villagers.  With hands waving in the air, students shouted "Miss!  Miss!  Miss!" trying to gain my attention.  This made every teacher quietly chuckle.  "Children...Children, Julie yelled through a fit of laughter.  He is not a miss, he is a sir!  Turning towards me she whispered, "Please excuse them, many have never had a male teacher before.”

The bell began to ring just as a little voice piped up from the crowd, "Sir, can I touch your legs?"  And with that the new school term began.
Posted by Unknown at 7:39 AM