During the time between Christmas and New Year’s, the village hosted a week-long celebration in the maneaba.  Most families brought their sleeping mats to the venue and took up residency for the week.  The nights were filled with various activities from dancing to eating to viewing imported Chinese films with various German subtitles.  More often than not, these nights lasted well into the early morning hours.  One of the films was someone’s recording of a movie shown in a theater.  This allowed us to not only watch the movie, but also to watch theater patrons as they went in and out of the theater for popcorn, drinks or to use the bathroom.  I often fell asleep in the maneaba on coconuts, cups or whatever else was around during these events.

With all of the late nights, New Year’s Eve seemed to come quickly.  To escape the constant celebrations, all Peace Corps Trainees and staff planned a quiet camping event for the new year.  I, along with the other three male volunteers, were charged with setting up a secluded site in the bush.  Setting up lines for mosquito nets, collecting firewood, and digging a beach-side pit for the bonfire, our site was set within a few hours’ time.  Our I-Kiribati families questioned us as to why we were working in the bush for so long when we returned.  They feared for our safety, because the bush was where dead bodies lay, and spirits resided.   I knew nothing of this.

Even more perplexing than wandering around the bush at night, was our plan to celebrate New Year’s with a bonfire.  I-Kiribati use fire for practical purposes such as burning trash or cooking food.  We were doing neither of these.  Collecting fallen branches for a fire with no use confused even our trainers.  Despite this, the bonfire was a huge success. It provided us with a sense of familiarity as we watched the first sunrise of the new millennium +1. 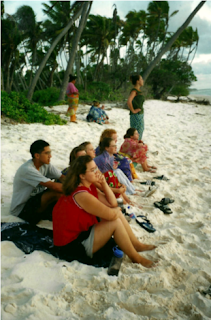 New Year 2001 on the shore of Maiana Island

By the end of training, all 27 Peace Corps Trainees had survived bouts of homesickness, weeks of confusion, countless cultural mistakes, physical ailment, exhilarating travel experiences with accompanying episodes of seasickness, seemingly constant celebrations and weeks of stealth 3am dance practices.  We were sworn in as K-27 on January 23, 2001.  We were to receive our official assignments upon arrival in Tarawa. 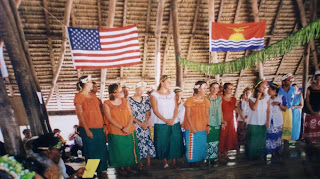 Leaving Maiana was both exciting and sad as all volunteers developed a strong connection with their families. While most of the goodbyes took place in the village, some families traveled to the boat. Some students, my host sister included, took the boat back to Tarawa for the new school year. The next day volunteers gathered to learn our assignments. I was assigned to a Primary school in Abaiang Island, just north of Tarawa.


Being away from home on holidays, birthdays and other special days were both difficult and exciting.  The first American holiday we celebrated was Thanksgiving.  For many, the warm temperatures and salty air conflicted with the winter holiday.  I was standing on the front porch of the Director’s house when Stacy, our PCMO, arrived with two frozen turkeys wrapped in plastic bio-hazard bags.  I have dinner, she shouted!  From morning to afternoon we prepared dinner, shared stories, and got to know more about each other over Thanksgiving dinner.

One month later, we were preparing for Christmas celebrations in Maiana Island with our new host families.  Everything about Christmas which I was used to in the States, was not in Kiribati.  There were no crowded malls, parking lots or holiday lights hanging from snow covered roofs.  These were nothing more than distant memories from my hot and humid seaside village.  The only thing that brought some sense of Christmas, was the prolonged drop in temperatures and increased frequency of storms.  This disrupted mail delivery for several weeks.  All of us felt disconnected as time went on with no news from home.  The December mail drought had a prolonged impact on everyone’s mood, leaving many wanting nothing more than just one letter from home for Christmas/Chanukah that year.

To brighten our spirits, we decided to go caroling throughout the host villages on Christmas Eve.  Beginning in the southern village at sundown, we walked across the island, stopping at each host family’s house.  Tekaai, our logistics man, followed the group in his Peace Corps truck.  He said he was following so he could drive the southern volunteers back home.  None of suspected the truck to be filled with packages from home.  When we finished singing at the last northern village house, he called all of us to the back of the truck.

Now that you are finished.  The whole island is happy because of your beautiful songs, Tekaai said.  We all knew he was joking as many of us had trouble carrying several tunes.  Pointing to the opened bed of the truck, he stated, we wanted to wish all of you a Merry Christmas!  I could not believe my eyes.  The bed was filled with boxes from the USA!  We were like kids!  Everyone grabbed a box, and called the intended receiver’s name.  John! Cassandra! Dianne! Lauren! Matt! Mike! It was just like home, except we were in Maiana, and Santa’s sleigh was now Tekaai’s truck.


Volunteers gathered together to open their presents in their respective villages. The southern village volunteers gathered in Marissa’s kiakia.  Each of our boxes contained letters, pictures, and foods from home.  Her host family must have thought something was wrong as we screamed, and laughed with each present.

When we calmed down, we migrated to her family’s bwia to share our gifts.  To my surprise, they only tried a few items.  They did not want to take things which obviously made us happy.  Marissa suggested I bring my guitar as others wished to continue singing songs.  I ran home to get the guitar, my host brother, and sister.  We sang well into Christmas morning.  Christmas without family was difficult, but I feel like I learned how Christmas could be without overzealous consumerism should be.